It’s an exciting time for documentarians and I am proud to part of this movement. I encourage all to take a look at two recent Variety articles that highlight the move from audiences to absorb the documentary form in new ways (predominantly streaming) and the artists who have evolved over time.

Hassan Sharif: I Am The Single Work Artist

Show Description: This landmark retrospective will include Hassan Sharif’s diverse body of work from the early 1970s to 2016. This retrospective is the culmination of Sharif’s long and storied history with the Emirate of Sharjah, where he first began staging interventions and exhibitions of contemporary art.

If you are in the area (Sharjah, UAE) from now until Feb. 3rd 2018, drop everything you are doing and go see this exhibition.  It’s a rare opportunity to see all of the work from the artist Hassan Sharif in one place. It is almost like the six galleries were made for his one man show. He was one step ahead of his time. Hassan Sharif worked in found object installations, sculpture, book art, painting, performance and multimedia. I can’t say enough positive exclamations about this retrospective.  I can’t help but feel like there won’t be another opportunity to see all of his work in one place.   I just reviewed the corresponding documentary at DIFF with equal excitement. The studio workspace pictured in the documentary was captured and moved in its entirety to the Sharjah Art Foundation.

It was finally time to invest in the wave of today – Apple’s ipad 2.  I’m going to be more portable than ever.  I never want to return to an office full time!

I’ll let you know what apps I find the most helpful but, this is where I started for the most comprehensive list of helpful apps. 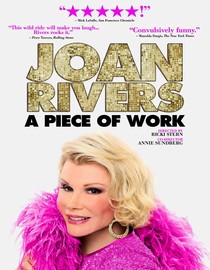 Summary: Documentarians Ricki Stern and Annie Sundberg provide an uncompromising glimpse into the personal and professional life of comedian and red-carpet mainstay Joan Rivers, a woman clinging stubbornly and steadfastly to the pop-culture bandwagon. Stern and Sundberg — whose previous film, The Devil Came on Horseback, covered the Darfur genocide — take a no-less-intensive approach to their subject here, taking a hard look at fame’s bitter toll.

Joan Rivers surprised me.  Before seeing this movie I had zero interest in Joan RIvers as a person and certainly didn’t care about her career.  But now … I think she’s super hard working, strong woman, who deserves appreciation for more than her comedy.  Can someone out there try her in drama?  Her stand up is hilarious.  She can laugh at herself but, takes working very seriously.  I had no idea that she thinks “no job is too small”.  She comes across as lovable and impressive.

I totally forgot about the camera work or composition.  I was sucked into her character.

Come on everyone … give Joan Rivers a chance.

And guess what? You can stream it on Netflicks.

This documentary is true kiwiana.  If you aren’t sure what that is – I guess you’ll have to watch.  The documentary was shown prime time on NZ Channel 1.  It’s a free channel here in New Zealand.  Actually, this documentary has taken nearly $2 million at the NZ Box Office making it the Top Documentary Film ever released in New Zealand !

Summary:  Leanne Pooley’s documentary – offers a revealing look into the lives of the world’s only yodeling lesbian twin country-and-western singers.

The documentary was shot and composed in a very traditional manner and thus a bit dry.  But, it was watchable because the twins have a good story.  They are unique and special.  I found myself downloading a few of their songs from iTunes.  If you notice them coming to a folk festival near you – most definitely check them out!

The official website and trailer for the movie: http://topptwins.com/tv-and-film/untouchable-girls

This film was recommended by my friend – Craig G.  We got into a discussion about the most F*ed up movies/documentaries that we’ve seen . I think the conversation started with “Happiness” but, it definitely ended with the documentary “Tarnation”.He said “you have to see tarnation”.

Yes, the story was sad.  But, I focused on the good things about the film.  I got to experience – first hand – how a person’s parents shape them as a child and continue to permeate their life as adult – even if they are nuts. The most impressive thing was the amount of video gathered from the main character’s childhood.  I was impressed by the density of footage, audio recordings, and photographs collected for the film.  He showed all of his family’s faults.  I am sure that wasn’t easy but, hopefully –it was therapeutic.

The film was all about the filmmaker.  This was the films advantage and main disadvantage.  I can’t imagine the director doing another film.  This one was so indulgent.  It was the type of indulgent usually reserved for well-known narrative directors like Quentin  Tarantino.

I do also really like the film’s tag line.  “Your Greatest Creation is the Life you Lead.”

I must confess — I’m disappointed in myself for not keeping up the “drink” part of the Doc&aDrink name.  It’s not because I haven’t been drinking anything.  In fact – since I’m in a new country (New Zealand) – I’ve been drinking all sorts of new beers, wines and spirit combinations.  Katy isn’t here to review the drinks with me and drink reviews are more fun together.  BUT – the show must go on!

This review goes with my last doc review – American Teen.  Truth be told – I actually watched the movie all snuggled up in bed – on a sunday morning.  So – technically – the movie was paired with coffee. BUT, for the sake of bringing the DRINK back in Doc&aDrink – I paired the doc with a Kiwi Paradise Cocktail.

Perfect for the high-school girls.

Correction: High-school girls shouldn’t be old enough to drink at all.

They Should substitute the alcohol for juice.

Last weekend I was on Grease overload – the soundtrack, the movie, a pizza night sleepover party with more singing.  The teenage angst rolled into this weekend with the documentary selection…..

The documentary was exactly what I remember of highschool rolled into all of my favorite movies from the same time.

I don’t mean to give anything away but yes there was the faithful school announcements (Grease), followed by the introduction of the stereotypical characters (breakfast club), and their peer pressured ways (Pretty in PInk).  It’s an easy to watch documentary.  I liked it.  I don’t think it was exceptional or revolutionary but, dependable and liable in all its clichéd glory.

Don’t be thrown off by the animation appearing randomly about an hour into the film.  I think it smoothes itself into a purposeful normalcy – like the super dork – in the end.

If you were worried there wouldn’t be a final basketball dual (Teen Wolf), Prom NIght (Pretty in PInk) or Graduation Speech (Say Anything) – don’t worry they are all in there too.

I feel the need to end this posting with a cheer – from none other than Shaker Heights High School’s Field Hockey Team to another rival Field Hocky Team.

The premise for the new Joaquin Phoenix doc entitled I’m Still Here: The Lost Year of Joaquin Phoenix, has leaked to the press.  The verdict: It’s a hoax!  Last spring – he ran around town like a crazy person.  His actions only be explained as “bizarre”.  To top off the weirdness was the cameras following him around – headed by his brother-in-law Casey Afflack.

Plot Points : The film shows Phoenix snorting cocaine, having sex with prostitutes and simply falling apart in his quest to land a record deal. It shows him meeting with Sean Combs in a desperate plea to get him to produce his record album.

Best Review in One Sentence:

“According to the Los Angeles Times, those present at the screening were baffled by the on-screen weirdness (including a bizarre scene involving human feces and lots of male frontal nudity).”

2nd Best Review in One Sentence:

“This thing is starting to sound less like a Joaquin Pheonix mockumentary and more like a Nick Cannon biopic.”
Articles:

COCAINE – RAP STARS – PROSTITUTES – AND FECES – WHO DOESN’T WANT TO SEE THAT?